Csardas by Vittorio Monti played by the Szalai Hungarian Gypsy Band.  This famous piece was composed in 1904 and there are countless renditions.

The Polovtsian Dances from the end of Act II of Alexander Borodin’s opera Prince Igor with rock star conductor Gustavo Dudamel and the Vienna Philharmonic.

You have probably heard the news that gravitational waves have finally been directly detected. The Times has a nice summary. Also see Steve Hsu. Here is an interview with one of the founders, Rainer Weiss. I remember Weiss talking about LIGO back when I was a graduate student at MIT. It’s nice to see that he finally succeeded.

Since income inequality is a big issue in the United States and the upcoming election, I thought it would be instructive to look at how income inequality may affect the total US income (GDP) in a very simple model. This will only be a linear model in the sense that I will model domestic spending given some income without demanding self-consistency so spending equals income. However, I think the same qualitative results will hold. Let us suppose that the a person’s spending as a function of income

be the distribution of income (i.e probability density function).  The national income is then

is the US population. We can write this as

, where the bar denotes expectation value or average.  So income inequality is measured by how wide

is. A perfectly equal society would have

is linear so your spending is exactly proportional to your income. In this case,

, for any distribution and thus income inequality does not affect GDP. You will always get a GDP equal to spending at the US average. Now suppose that spending is super-linear or convex so you spend more as you earn faster than you earn it. This assumes that you save less the richer you are. In this case, by Jensen’s inequality

, and the total GDP is bigger than if everyone spent at the average.  In this case, income inequality would actually increase the pie. Now, finally in the case where the spending function is concave, you spend less as you earn more, or save more as you earn more then

A performance of Mozart’s Table Music Duet for two violins.  I think this piece best exemplifies the singular brilliance of Mozart.  This piece consists of only a single line of music (see below for those who can read music).  One person reads it right side up and the other reads it upside down.  Thus the beginning of the piece for one person is the end of the piece for the other person read upside down.  In music, the position of the notes is relative to the staff so a note read upside down is not the same read right side up, except for the middle B in treble clef.  For example, the D  read right side up (4th line from the bottom) is equivalent to the G read upside down (2nd line form bottom) in the key of G major. 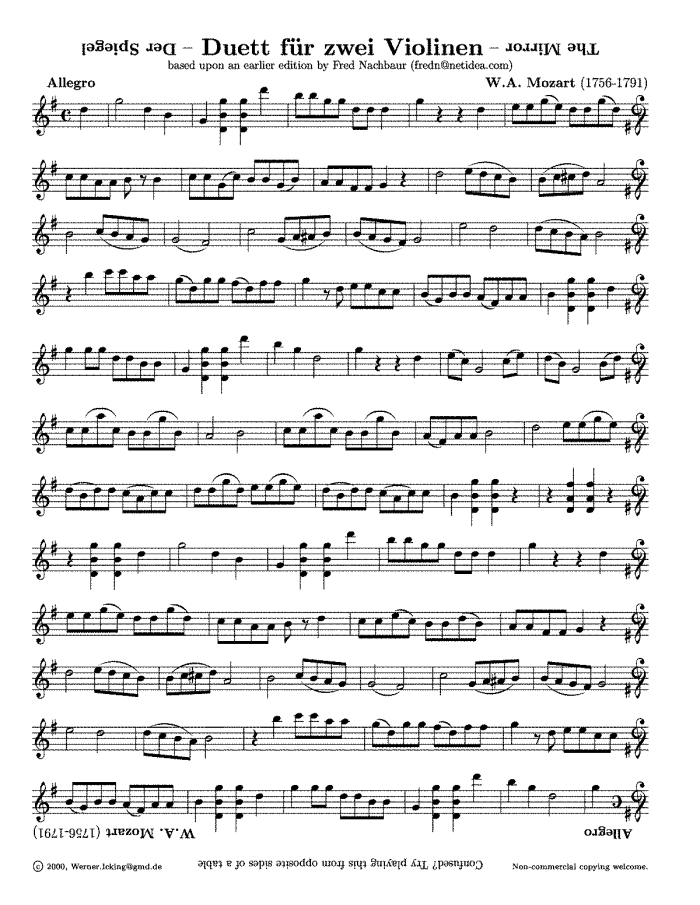