Calorie restriction has been shown to extend life in several types of animals including worms, flies and mice. The question was whether it would work on humans. Given that such an experiment would take decades to conduct and carry a lot of ethical baggage,  scientists turned to monkeys and started experiments in the late eighties.  Well the results are in and the answer is probably not. A study just out in Nature (link here) finds that rhesus monkeys that were given a reduced calorie diet did not live longer. This contradicts a previous study from the University of Wisconsin published in Science in 2009 (link here) which did show caloric restriction extended life of monkeys.  However, in that study, monkeys that died due to causes that were deemed unrelated to aging were not included.  Here is a New York Times summary. There are some people who are currently limiting their diets in an attempt to live longer so perhaps we will have some unofficial data points on humans in few decades.  My guess is that there will not be a net increase in humans since lifespan is a complicated thing and there are always tradeoffs.  Caloric restriction may be protective in some aspects but it may also be detrimental in others.

The selection of Paul Ryan as the Republican vice presidential candidate for the upcoming US federal election has brought health care reform back into the spotlight.  While the debate has been highly acrimonious, the one point that everyone seems to agree on is that the rate of increase in health care and in particular medicare spending is unsustainable.  Health care is currently one sixth of the economy and it will take up an increasing share if the growth is not reduced.  I think that a really expensive health care system may actually be a good thing.  What people tend to forget is that there are two sides of a cost.   When we pay for healthcare, that money goes to someone.  Making something more efficient, means producing the same amount of stuff with fewer people.

The official unemployment rate is currently about 8% but the actual fraction number of people who don’t work or wish they had more work is much higher.  Efficiency eliminates jobs.  People like Tom Friedman of the New York Times thinks (e.g. see here) that this will just free us up to do “creative” jobs.  However, what if you are a person that doesn’t want or is unable to do a “creative” job?  My guess is that as we become more efficient, more and more people will be left with nothing to do.  The solution is either to have a massive welfare system or we become less efficient.

However, not all inefficiencies are equal. We wouldn’t want monopolies where all the money flows to a small number of individuals.  What we need is a highly stochastic form of inefficiency that involves lots of people. Healthcare may be just what we need. It’s something that is highly decentralized and affects everyone.  It can’t be easily outsourced. I’ve argued before that having 80% of the economy be devoted to healthcare doesn’t seem that outlandish.  After all, how many flat screen TVs do you need?

Different internal Bayesian likelihood functions may be why we disagree. The recent shooting tragedies in Colorado and Wisconsin have set off a new round of arguments about gun control. Following the debate has made me realize that the reason the two sides can’t agree (and why different sides of almost every controversial issue can’t agree) is that their likelihood functions are completely different. The optimal way to make inferences about the world is to use Bayesian inference and there is some evidence that we are close to optimal in some circumstances. Nontechnically, Bayesian inference is a way to update  the strength of your belief in something (i.e. probability) given new data. What you do is to combine your prior probability with the likelihood of the data given your internal model of the issue (and then normalize to get a posterior probability). For a more technical treatment of Bayesian inference, see here. I posted previously (see here) that I thought that drastic differences in prior probabilities is why people don’t seem to update their beliefs when faced with overwhelming evidence to the contrary.  However, I’m starting to realize that the main reason might be that they have completely different models of the world, which in technical terms is their likelihood function.

Consider the issue of gun control.  The anti-gun control side argue that “guns don’t kill people, people kill people’ and that restricting access to guns won’t prevent determined malcontents from coming up with some means to kill. The pro-gun control side argues that the amount of gun violence is inversely proportional to the ease of access to guns. After all, you would be hard pressed to kill twenty people in a movie theatre with a sword. The difference in these two viewpoints can be summarized by their models of the world.  The anti-gun control people believe that the distribution of the will of people who would commit violence looks like this

where the horizontal line represents a level of gun restriction.  In this world view, no amount of gun restriction would prevent these people from undertaking their nefarious designs.  On the other hand, the pro-gun control side believes that the same distribution looks like this 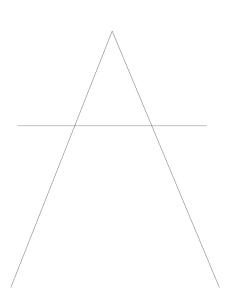 in which case, the higher you set the barrier the fewer the number of crimes committed. Given these two views of the world, it is clear why new episodes of gun violence like the recent ones in Colorado and Wisconsin do not change people’s minds. What you would need to do is to teach a new likelihood function to the other side and that may take decades if at all.

I’m currently in San Diego for the SIAM Life Sciences conference.  I gave a talk reviewing my work on binocular rivalry.  My slides are here.

Noted social scientist, Andrew Hacker, wrote a provocative opinion piece in the New York Times Sunday arguing that we relax mathematics requirements for higher education. Here are some excerpts from his piece:

New York Times: A TYPICAL American school day finds some six million high school students and two million college freshmen struggling with algebra. In both high school and college, all too many students are expected to fail. Why do we subject American students to this ordeal? I’ve found myself moving toward the strong view that we shouldn’t.

…There are many defenses of algebra and the virtue of learning it. Most of them sound reasonable on first hearing; many of them I once accepted. But the more I examine them, the clearer it seems that they are largely or wholly wrong — unsupported by research or evidence, or based on wishful logic. (I’m not talking about quantitative skills, critical for informed citizenship and personal finance, but a very different ballgame.)

…The toll mathematics takes begins early. To our nation’s shame, one in four ninth graders fail to finish high school. In South Carolina, 34 percent fell away in 2008-9, according to national data released last year; for Nevada, it was 45 percent. Most of the educators I’ve talked with cite algebra as the major academic reason.

The expected reaction from some of my colleagues was understandably negative. After all, we live in a world that is becoming more complex requiring more mathematical skills not less. Mathematics is as essential to one’s education as reading. In the past, I too would have whole heartedly agreed. However, over the past few years I have started think otherwise. Just to clarify, Hacker does not (nor I) believe that critical thinking is unimportant. He argues forcefully that all citizens should have a fundamental grounding in the concepts of arithmetic, statistics and quantitative reasoning. I have even posted before (see here)  that I thought mathematics should be part of the accepted canon of what an educated citizen should know and I’m not backing away from that belief. Hacker thinks we should be taught a “citizen’s statistics” course. My suggested course was:  “Science and mathematics survival tools for the modern world.”  The question is whether or not we should expect all students to master the abstract reasoning skills necessary for algebra.

I’ll probably catch a lot of flack for saying this but from my professional and personal experience, I believe that there is a significant fraction of the population that is either unable or unwilling to think abstractly.  I also don’t think we can separate lack of desire from lack of ability. The willingness to learn something may be just as “innate” as the ability to do something. I think everyone can agree that on the abstract thinking scale almost everyone can learn to add and subtract but only a select few can understand cohomology theory.  In our current system, we put high school algebra as the minimum threshold, but is this a reasonable place to draw the line? What we need to know  is the distribution of people’s maximum capacity for abstract thinking. The current model requires that  the distribution be  almost zero left of algebra with a fat tail on the right. But what if the actual distribution is broad with a peak somewhere near calculus?  In this case, there would be a large fraction of the population to the left of algebra. This is pure speculation but there could even be a neurophysiological basis to abstract thinking in terms of the fraction of neural connections within higher cortical areas versus connections between cortical and sensory areas. There could be a trade-off between abstract thinking and sensory processing. This need not even be purely genetic. As I posted before, not all the neural connections can be set by the genome so most are either random or arise through plasticity.

To me, the most important issue that Hacker brings up is not whether or not we should make everyone learn algebra but what should we do about the people who don’t and as a result are denied the opportunity to attend college and secure a financially stable life. Should we devote our resources to try to teach it to them better or should we develop alternative ways for these people to be productive in our society? I really think we should re-evaluate the goal that everyone goes to college. In fact, given the exorbitant cost and the rise of online education, the trend away from traditional college may have already begun. We should put more emphasis on apprenticeship programs and community colleges. Given the rapid rate of change in the job market, education and training should be thought of as a continual process instead of the current model of four years and out. I do believe that a functional democracy requires an educated citizenry. However, college attendance has been steadily increasing the past few decades but one would be hard pressed to argue that democracy has concomitantly improved. A new model may be in order.