It’s hard to see from the photo but when I checked my bucket after a week away, there were definitely a few mosquito larvae swimming around. There was also an impressive biofilm on the bottom of the bucket. It took less than a month for mosquitoes to breed in a newly formed pool of stagnant water. My son also noticed that a nearby flower pot with water only a few centimeters deep also had larvae. So the claims that mosquitos will breed in tiny amounts of stagnant water is true. 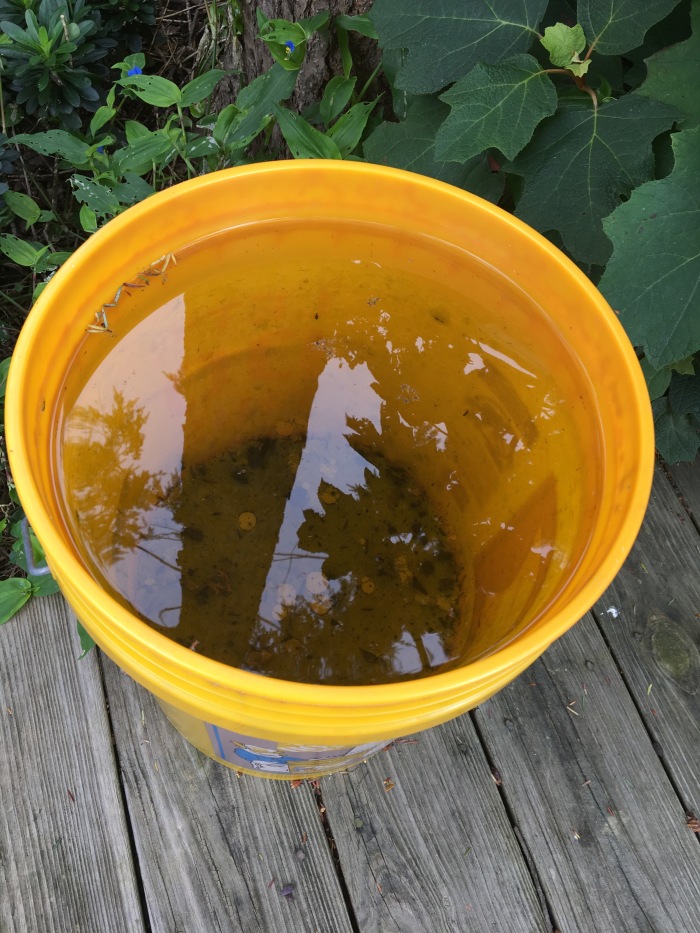 The screen on my wife’s iPhone was shattered this week and she had not backed up the photos. The phone seems to still be functioning otherwise so we plugged it into the computer to try to back it up but it requires us to unlock the phone and we can’t enter in the password. My wife refused to pay the 99 cents or whatever Apple charges to increase the disk space for iCloud to automatically back up the phone, so I suggested we just pay the ransom money and then the phone will back up automatically. I currently pay both Apple and Dropbox extortion money. However, since she hadn’t logged onto iCloud in maybe ever, it sent a code to her phone under the two-factor authentication scheme to type in to the website, but of course we can’t see it on her broken screen so that idea is done. We called Apple and they said you could try to change the number on her iCloud account to my phone but that was two days ago and they haven’t complied. So my wife gave up and tried to order a new phone. Under the new system of her university, which provides her phone, she can get a phone if she logs onto this site to request it. The site requires VPN and in order to get VPN she needs to, you guessed it, type in a code sent to her phone. So you need a functioning phone to order a new phone. Basically, tech products are not very good. Software still kind of sucks and is not really improving. My Apple Mac is much worse now than it was 10 years ago. I still have trouble projecting stuff on a screen. I will never get into a self driving car made by any tech company. I’ll wait for Toyota to make one; my (Japanese) car always works (my Audi was terrible).

It’s been about two weeks since I first set out my bucket, although I had to move it to a less obtrusive location. Still no signs of mosquito larvae, although judging from my bite frequency even with mosquito repellant, mosquito activity is still high in my garden. I see the occasional insect trapped (they are not really floating since at their size water is highly viscous) in the surface and there is a nice collection of plant debris at the bottom. The water level seems a little bit higher. It has rained at least once every two days since my first post although it has also been very hot so the input seems mostly balanced by the evaporative loss. I’m starting to believe that mosquitos have their prefered gestation grounds that they perpetually use and only exploit new locales when necessary.